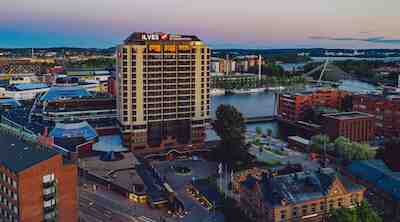 All the hotel rooms as well as the lobby, meeting and restaurant facilities will be renovated. The work is estimated to be completed in December 2021.

Sokotel Oy, which operates the S Group's hotels in Finland's largest cities as well as in Tallinn and St. Petersburg, is now planning to renovate their Tampere landmark, Original Sokos Hotel Ilves. The hotel will close on 13 December, for the duration of the renovations, expected to last approximately one year. In addition to the overhaul, all the hotel's hotel rooms as well as the lobby, meeting and restaurant facilities will be renovated. The work is estimated to be completed in December 2021.

Ilves will continue to offer a wide range of restaurant and banquet services.

"Although the restaurants at Ilves will continue to have different business concepts, courage, multi-sensory experiences and experientialism will be emphasized in each of their interiors – with the help of colors and soundscapes," says Ekman.

Ilves – a hotel true to Tampere

The hotel will be renovated with a focus on the main characteristics of Tampere. Local characteristics form the most important part of Ilves' identity and have always been emphasized in the hotel. And they will continue to. The hotel location, in a red-brick factory environment on the shores of Tammerkoski rapids, has strongly inspired the design of the hotel rooms and other facilities," says Original Sokos Hotel Ilves Hotel Manager Mikko Kankaanpää.

"The relaxed local hospitality, combined with the elegant facilities and its location in the national landscape, will make the new Ilves attractive, and at the same time easily approachable, both to locals as well as visitors from far away."

Sokotel Oy is a subsidiary of SOK's tourism and hospitality business, which operates 18 Sokos Hotels and 7 Radisson Blu Hotels in the Helsinki metropolitan area, Tampere, Oulu, Vaasa, Tallinn and St.Petersburg.