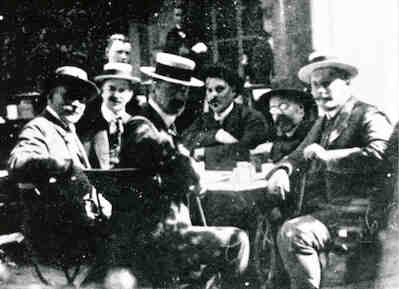 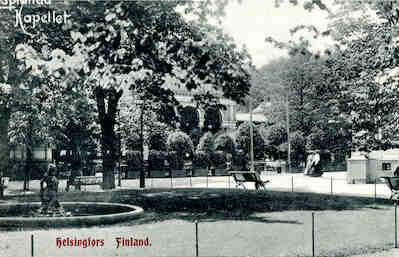 Kappeli was already open for business in 1867. Get to know the history of Kappeli!

Kappeli – already open for business in 1867

In 1840, Confectioner Jerngren had a booth erected in Helsinki's Esplanade, where pastries and lemonade were sold. This lofty building – slightly reminiscent of a church – soon got christened Kappeli (the Chapel).
The wooden booth quickly fell into disrepair, however, and it was necessary to build something new on the site. The new Kappeli, designed by Hampus Dahlström, was opened to the public on the very same day that Finnish Commander-in-Chief Marshal Mannerheim was born – the fourth of June, 1867.

Kappeli became the city's number-one summer venue – and a rendezvous for meetings in the afternoon. The news of the days was exchanged – as well as what was behind it. In 1883, restaurateur Josef Wolontis obtained the restaurant's rental rights, and under his management Kappeli became Helsinki's nerve centre in the heart of the city, a meeting-place for poets and musicians alike.

One of the great ideas Wolontis had was to acquire a modern cooler for beer. For this reason, customers could always get frothy cold beer at Kappeli. Soon practically all of Helsinki gathered round Wolontis' cold beer and hot music. The resounding horns of military orchestras became Kappeli's trademark and the prelude to Kappeli's rich musical tradition.
In 1887, an elevated bandstand was erected in the shape of a clam in front of Kappeli. Its greatest hero was conductor Aleksei Apostol. His band delighted the people of Helsinki following the outset of the 20th century for over 20 years.

Artists liked to meet each other at Kappeli. Poet Eino Leino in his flowing cape and broad-brimmed hat was part of the regular cast – his designated table is still on view in Kappeli's west wing. Musician/composer Oskar Merikanto also enjoyed taking a seat at Kappeli. From his table by the window, he gazed with pleasure at the south harbour sparkling in the evening sun. Poet L. Onerva also aroused a bit of a scandal here by daring to sit with a group of men – without her own cavalier for protection.
Fine art began to appear on Kappeli's walls during the tenure of restaurateur Wetterhoff. He adopted the habit of offering a Sunday breakfast to his artist friends during the winter. As a thank-you, they decorated the restaurant with their own works. For example, Albert Edelfelt painted a picture of Gambrinus, inventor of beer, on a round medallion placed on the wall.

All kinds of things could happen at Kappeli. Perhaps its most famous tale has it that a rather large group of Finnish artists – Aho, Järnefelt, Leino, Sibelius and Gallen-Kallela, among others, were gathered in the usual way at Kappeli when Jean Sibelius – Finland's great composer – was required to leave for Stockholm for a couple of days to complete a musical composition.
When he finally returned from his journey, the very same group was still sitting together at Kappeli. One of the artists blurted out: "Listen here, Jean – either you stay outside or stay inside, but stop coming in and out all the time!"

Tea with a punch!

The Prohibition hit Finland in 1919, and suddenly there wasn't much use in keeping Kappeli open in the winter. Restaurateur Lundbom, in charge of the restaurant at the time, decided to renovate the bandstand – and the kitchen. Good food became the most important thing.
Soon Kappeli's lunches and suppers became famous. Coffee and lemonade were still popular drinks, with one addition – tea with a punch!

Asparagus has always been enjoyed at Kappeli in the spring. Influential citizens during the 1950s traditionally visited Kappeli to dine on the summer's first potatoes. Kappeli was still closed during the winter, and unfortunately the building deteriorated due to the cold and wetness.
In the 1970s, the ‘chapel' was renovated for year-round use once again. With the arrival of the eighties, Kappeli's interiors were renewed, and the hot names in beat music played to the packed premises, such as The Bullworkers. The restaurant was one of those rare places in Helsinki which were always open till four in the morning and whose minimum age limit was raised to 24.

The benefit is available at this restaurant