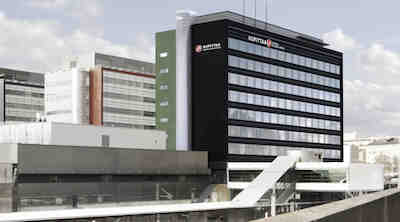 Turku Regional Cooperative to open a new hotel in Kupittaa

Turku Regional Cooperative (TOK) will open an Original Sokos Hotel in the immediate vicinity of the Kupittaa railway station in the spring of 2020. The nine-storey hotel will have 196 rooms in total and the capacity to accommodate nearly 500 people.

Kupittaa is one of Turku's most strongly growing employment areas and, thanks to brisk housing development, it is also becoming a popular residential area. The area's development is one of the Spearhead Projects of the City of Turku, and it plays an important role in increasing the city's appeal and competitiveness.

"The area has not had a hotel so far. In addition to co-op members, Original Sokos Hotel Kupittaa will cater to the particular accommodation needs of businesses, institutes of higher education, educational institutions, hospital and research activities, as well as the sports sector," says Mikko Eskelinen, divisional director of Turku Regional Cooperative.

Thanks to the proximity of the railway and motorway, the hotel is also easy to reach. It is located within reach of excellent public transport connections and within walking distance from the centre of Turku.

The property of the new hotel will be owned by the Turku-based investment company Rausanne Oy.

"It's great to be involved in the development of Turku's hotel supply and the Kupittaa area. It's a perfect location for a hotel," says Arto Puolimatka, managing director of Rausanne.

The hotel project's main contractor is YIT and the main designer is Haroma & Partners Architects.

"It's great to be completing this set of three inter-linked buildings. Once the third phase of Intelligate now under construction is finished, the modern hotel building will complement the range of services offered by the area's commercial and office buildings," says Jyrki Meri, Vice President, YIT.

The project's total investment amounts to more than EUR 30 million.

The top floor of the hotel will house an urban terrace, gym and sauna facilities, providing both guests and the city's residents with facilities to book. At street level, the hotel will be home to Bistro Elli, with extended opening hours, as well as lobby and reception areas with a direct connection to the Kupittaa railway station. The hotel's interiors will be designed by Gullstén-Inkinen Design & Architecture, while the interiors of Bistro Elli and the lobby areas will be designed by Kudos Dsign.

In addition to the hotel project in Kupittaa, TOK has a number of other hotel projects underway in the region of Turku. The complete overhaul of Solo Sokos Hotel Turun Seurahuone will be completed in February 2019 and the extension project of Original Sokos Hotel City Börs in early 2019. A new hotel to be located next to Radisson Blu Marina Palace is also on the drawing boards.

"We want to support the positive structural change of south-western Finland and be strongly involved in developing the dynamism of the Turku region and its appeal as a travel and conference destination," says Antti Sipola, managing director of Turku Regional Cooperative.


The Turku Regional Cooperative (TOK) is owned by more than 155,000 households in the Southwest Finland region. TOK operates grocery and speciality stores, service station stores and department stores, and is involved in the travel and hospitality business in 20 municipalities in the region. Its purpose is to provide services and benefits for its co-op members households.