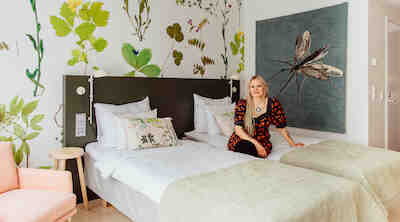 Original Sokos Hotel Presidentti was renewed during the years 2016-2018. The concept design of the renovation is by Paola Suhonen and Ivana Helsinki.

Located in the center of Helsinki, the Original Sokos Hotel Presidentti has undergone a complete transformation. The hotel, with an interior design by Paola Suhonen, introduces guests to an array of Finnish phenomena - Sisu (a word used to typify the Finnish spirit), Tranquility, Fairytale Forest, Midsummer and Winter Storm - in unique and unexpected ways.

The interior design plays with Nordic moods and shades of colour. The designer's vision is an imaginative interpretation of modern Finnish opposites, where Scandinavian and Arctic dimensions boldly blend with Finnishness.

"A story-driven hotel where the truly Finnish is combined with the exotic, had yet to be found. The world has its fair share of design and boutique hotels. Finnish design is reflected in many hotels as part of the interior design. We have wanted to create an entity in which the Finnish moods and tales dominate," outlines Paola Suhonen of Ivana Helsinki.

"I have wanted to incorporate a wide mood range for hotel Presidentti, because the hotel should be equally interesting to the business traveller who has "seen it all", to the tourist visiting Finland and the domestic leisure traveler alike," Suhonen explains. "Different mood settings can result in different experiences during each visit."

Prevailing trends of craftsmanship and authenticity are strongly reflected in Presidentti's new look. The rooms feature decorative items, such as hand-tufted rugs and theme wallpapers, designed exclusively for the hotel. Unique designs are also on display in the public areas.

"A contemporary hotel should offer guests fortified experiences and sensations. Our goal was a hotel which can create vivid memories, and which can even become a destination in itself," Original Sokos Hotel Presidentti General Manager, Hannele Laurila, proudly states. "The response we have received to date confirms that we have been successful."

The hotel's revamped entrance level, with its display of combinations of wood, concrete and copper, leads guests into a world of tales. A showy catwalk-like staircase leads to Bistro Manu, which serves hotel guests masterful flavours, and to the presidential conference floor. The conference area lobby welcomes guests with an impressive image of President Urho Kekkonen, who inaugurated the hotel.

All Original Sokos Hotel Presidentti's facilities have been renovated during the years 2016–2018. As a result of the transformation, the hotel also received the Cinema Pressa, a motion picture theatre for private screenings. The autumn of 2018 will additionally see the opening of a gym for hotel guests.

Design Agency KOKO3 Oy has been in charge of the realisation of the interior of Original Sokos Hotel Presidentti.