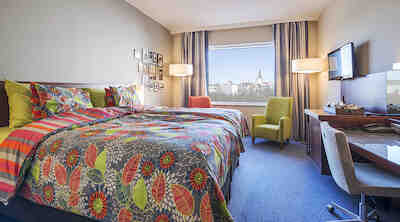 In April, Estonia will get Solo Hotel when Solo Sokos Estoria opens in conjunction with Original Sokos Hotel Viru

Last year, Sokos Hotels underwent the biggest concept reform in its history, and the chain's hotels are now divided into three categories. Solo by Sokos Hotels are distinctive Sokos Hotels classics; Break hotels are places of joy and energy; and Original by Sokos Hotels feature warm and welcoming service, with a touch of the local traditions. In April, Estonia will also get a Solo Hotel when Solo Sokos Hotel Estoria opens in conjunction with Original Sokos Hotel Viru.

The 93-room Solo Sokos Hotel Estoria opens in April in the annex added to Hotel Viru in 2004. The concept of the new hotel is unique in the Estonian market: each hotel room tells a fascinating story of Estonia using pictures and narrative texts. The intention is to inspire hotel guests and tempt them to visit Estonia again.

"We wanted to introduce a unique hotel to the Estonian hotel market – a hotel displaying the diverseness of Estonia for the guests," says Anu Soosaar, managing director of AS Sokotel, which operates the new hotel. "Business travellers to Estonia in particular would like to have a better understanding of their local partners. Through the stories displayed in the hotel rooms, we give them an introduction into the business, scientific and cultural life of Estonia, as well as its history and attractions. The pictures and text also give more substance to and enrich the stay of leisure travellers and will, we hope, inspire them to visit Estonia again."

Another unique characteristic of the project is that the stories were created in cooperation with more than forty Estonian organisations and attractions, including the Art Museum of Estonia, the Estonian Olympic Committee, the Estonian Song and Dance Festival Foundation, the Museum for Puppet Arts NUKU, and Tallinn City Tourist Office. The stories will be collected in an e-book which guests can buy as a souvenir for themselves or as a gift.

All rooms at the Estoria are of Superior class, equipped according to the high standards of Solo Hotels. The interiors, created using only the highest quality materials, are designed by the Estonian decorator Sigrid Valgma. Visitors enter the Estoria via a separate reception area located in the lobby of Original Sokos Hotel Viru.

The launch of Solo Sokos Hotel Estoria is part of the long-term development of Hotel Viru. In 2014 alone, AS Sokotel invested EUR 2.6 million in renewal. "The Hotel Estoria will be a separately operated hotel, focusing on the individual service experience. We are happy that Sokos Hotels now will be able to offer different hotel concepts in Tallinn, which is a popular all-year travel destination for Finns," says Tomi Peitsalo, Vice President, SOK international hotel business.

Come and visit in April

In April, Solo Sokos Hotel Estoria will arrange an opportunity for media representatives to visit the new story hotel. Invitations will be sent in March. If you are interested, you may also contact communications manager Peep Ehasalu, peep.ehasalu@sok.fi

Sokos Hotels is the most extensive hotel chain in Finland with more than 50 hotels in Finland, Tallinn and St. Petersburg. All our hotels are situated in city centres or in the middle of recreational locations, alongside good transport connections. In addition to accommodation, Sokos Hotels provide diverse meeting and restaurant services.

Sokos Hotels are being renewed. The chain is refining its diverse hotel network to meet an even wider range of needs and preferences. Solo by Sokos Hotels was launched in 2012–2013 and Break and Original by Sokos Hotels in 2013.