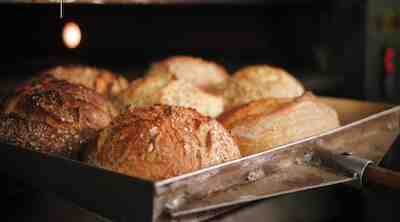 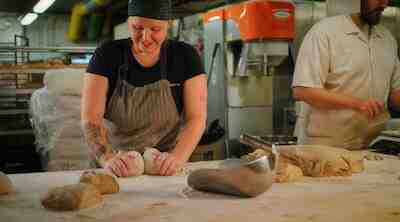 A local bakery won over the hearts of the Friends of Gunnar. The Friends went to visit a local Mbakery, the delicious products of which are also served at Restaurant Gunnar. The bakery's bread is baked with love and plenty of time, which gives the breads their fantastic characterful taste and texture.

Entrepreneur Mikko Hietala established the bakery in 2012, with 20 years of experience behind him. As an entrepreneur, Hietala was able to delve into his passion for hand-made confectionery products and sourdough baking. For the first six months, Hietala built up his operations in rented facilities, building his brands and designing his products. Now his brand already employs 42 people.

"The growth has been breath-taking, and I have needed to mop up plenty of sweat from my brow. Great artisanal products have found their place in the hearts of people," Hietala says thankfully. Mbakery has expanded its operations to Helsinki and now also to Tampere. They are also planning larger production facilities in Turku. Even though operations keep growing, the entrepreneur promises that the artisanal nature will not change.

"We would rather establish several small bakeries than build large production lines in massive facilities," Hietala assures. Some gentle devices facilitating the operations will probably be acquired in the future, but the touch of handcraft will remain.

Hietala's excitement can be seen from his appearance and his enthusiastic speech. He has plenty to tell about the soul of bread, its taste and production process, but mostly he speaks about his highly competent staff, which he can trust 100%. "The creator of our sourdough bread, Tiina, is a great example of professional passion; she might even take better care of our bread than her own children," Hietala laughs.

Gunnar's signature bread is in development

"In addition to retail, we have also started to work together with many restaurants and hotels. This kind of cooperation feels meaningful, as this enables us to create a suitable signature bread together with a restaurant, for example," Hietala says.

A signature bread is also being developed for Gunnar, and the Friends of Gunnar will also take part in its development process. Friends of Gunnar Heidi Wirkkala, Hanna Koivikko, Paula Stam and Sakari Lehti got the chance to taste the breads and share their opinions. Satisfied hums were the only sounds when the warm, soft bread disappeared from the plates. "Which of these breads would be best suited to Gunnar?" the Restaurant Manager Sami Kivirinta asks. Friend of Gunnar Paula Stam thinks that the potato and onion bread or the poppy bread would be best suited to the breakfast table, and other Friends second the idea. The seven-grain bread Kvintetti, which also tastes good with nothing but butter, pleases the jury, thanks to its great texture and taste. The Restaurant Manager seems to be happy with the jury's opinions.

Friend of Gunnar Paula Stam speaks about her recent trip to Italy, where artisan breads were a common sight. "Besides the taste, the appearance and the texture are also important factors," Stam says. "There should be more of these wonderful breads in Finland, too, and luckily we are already heading there!"

The bakery's sourdough bread is hand-made with patience

The production of hand-made sourdough bread is a long process with rewarding results. The dough is left to rest for 24–72 hours before being baked, which gives the bread its unique taste. The dough is turned at certain times to achieve the right kind of fluffy texture. After the dough has rested, it will be moulded by hand and baked on a hearthstone. The bread's production process ensures that it is at its best when it is in the store. "Many consumers seem to think that if the bread has a hard crust, it is too old. This is not the case; a hard crust is a sign of a deliciously crispy crust that will keep the bread soft inside!" Hietala explains. Consumers are often also concerned about the size of the bread, but baker Tiina Mäkinen has a tip for this: a half a loaf keeps well, if it is frozen wrapped in foil and then, after thawing it slowly, it is baked in a 100 degree oven for five minutes.

The bakery uses three different types of starters and one surprise starter that is used to bake improvised bread on Fridays. "Last time, for example, we tried bread that was coloured black by using activated carbon, and it was received really well," Hietala says. The bakery also attempts to use local producers for the other ingredients, such as carrots from Alitalo farm and flour from Liitola and Kemiö mills.

Next, the Friends of Gunnar will visit Kuninkaantie Brewery in Tuorla, Kaarina.