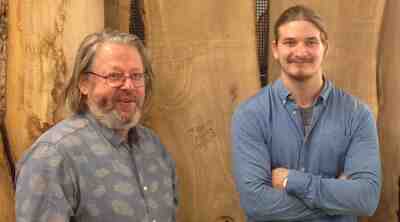 Gunnar and Chef's Sharing Table, invites You around one table

Gunnar's pride and joy, Chef's Sharing Table carved out of Scotch elm, continues the tree's unique story as a desk here with us at Gunnar.

With a decision confirmed by the City of Turku's senate, it was decided that planting trees on the Old Great Square could be started. The scotch elm was planted in 1835, in the place that was to become Porthan Park. After this, the tree experienced the many comfortable and joyful years of Turku. When the park was renovated in 2008, it was decided that the elm would be cut down, and the logs rested in storage up until 2013. After this, the wood was sawed into planks and transferred to an outdoor storage to dry. The planks were brought indoors in 2018 and now they are ready to be processed.  We cannot wait to see how the life of this tree will continue as a table as our customers from Turku come to admire it.

I was born 'with a hammer in my hand' into a family with several generations of carpenters in Jurva, Ostrobothnia.

I've been in contact with woodworking from a very young age, when I used to watch my father's work at his workshop. Therefore, choosing a career as a carpenter was a natural choice for me and I started my studies in Jurvan kotiteollisuuskoulu institute to become a period furniture maker. I also worked as a decorative carver in a Jurva-based period furniture factory, as I also completed a degree as a carver.

Then, I was offered the opportunity to go to Switzerland to renovate baroque sculptures of a 18th century monastery church. After one year, I spend another year working with a German wood carver, carving a wooden relief (5 m X 2.5 m).

After this, I began studies as a wood work designer and became interested in teaching.

Along with my teaching studies, I have also kept up my own production, both as a designer and as a crafter.

I completed the degree of Master of Arts in 2013, while working.

I worked with the trees from Turku's parks for the first times, when I was teaching in Halikko in the early 90s.

When you work with trees long enough, you start to value their unique nature; wood is no longer just a material among many others, but each plank has its own character. Therefore, these old trees should especially be treated respectfully. The materials should be listened to and it will tell you what it wants to become (dialogue with the material).

Samuel Kankaanpää will assist Hannu Parkkamäki in his work. Samuli is a third-year student of designer in Turku University of Applied Sciences and has previous training as a wood artisan. During his studies, he works at a carpentry workshop with custom orders.

"I think wood is a fantastic building material, as well as versatile. The greatest part is that anything can be made out of wood – the only limit is your imagination," Samuel summarises.