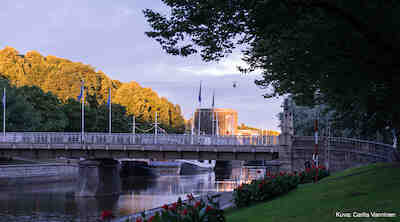 Did you know this about Samppalinna's history?

First the pavilion was built in 1865 to serve the steamship passengers.

A highly respected businessman P.C. Rettig had the restaurant pavilion built in 1865 to serve the passengers of the upper steamship harbour on the River Aura. Built on the side of Samppalinna Hill, this Swiss-style villa, designed by town architect C.J. von Heideken, was named "Rettika" after its owner P.C. Rettig. Some of the restaurant's rather healthy profits went into a fund that had been set up to raise money for the beautification of the building as well as the surrounding hillside and the nearby riverbank. In the early 20th century, the restaurant expanded with an outdoor terrace and a music pavilion that was erected in the nearby park.

Now nearing its 140th year as a restaurant, Samppalinna still brings great experiences to lovers of good food, drink and theatre. It also provides a memorable setting for private functions.